Tenzin Norbu was born on November 10 in GOLLATHALLA. He did his schooling from SOS TCV
BYLAKUPPE and later opted for Commerce Stream in TCV Bylakuppe itself. He got his famous knickname GOLA during his school days because he was from GOLLATHALLA. 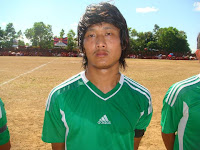 During schooldays he was the star of the school in the athletics with creating many RECORDS in 100 metres,200 metres,high jump,long jump,pole vault,shot put and many more!! Some of his records are still there in the ALL TIME TCV RECORD books!!! He was also one of most skillful and talented football players during his early days.He was also declared the best footballer and sportsperson in the school.
With his tremendous and skillful display of football in the GCM 2011 he has won the hearts of many people and created a huge fan base. We wish this talented and emerging soccer player from GOLLATHALLA a very good luck for his future!!!!